After a bit of a slow start, which was why I set it aside last year, the different story-lines really hooked me and I found myself anxiously turning pages awaiting what happens next. I think there are 5 main characters, and with the exception of one of them, which was well done just not for me, I enjoyed them all immensely which is rare for me. I most enjoyed the apprentice magicker Waylian because through him we learn a lot about the history of the world and how magic has played a part.

The scene with the Archmages was one of my favorites and it included my other favorite character, the "herald" who was really mysterious but had too few scenes. I would be interested in learning more about him.

Overall pretty grim world and characters, excellently written actions scenes, some unexpected twists, characters you thought might become good that didn't and ones you thought wouldn't did, and all of the characters threads converged to a believable and satisfying conclusion while setting up for what I hope will be a long series. The worldbuiding was good, just right for a reader who doesn't want to invest a huge chunk of time learning religions, factions, tribes, etc in yet another epic tome, as was the magic system, which I enjoyed exploring.

This book has a sword and sorcery feel to me, less emphasis on the world and more on the characters, not at all to say the former was lacking, but it seemed pretty character driven. The writing is great and I flew through this book, it was very fun and easy to read. Great character and place names which always increases my reading enjoyment.


This is the third time this year that giving a book a second try has paid off huge. The second book in this series comes out later this year, The Shattered Crown and I can't wait to read more Richard Ford! Highly recommended! If the first few chapters seem a little slow, don't give up.

It is well worth sticking with it for this excellent book.

Herald of the Storm (Steelhaven: Book One)

Grimdark readers should enjoy this book. It is a bit less grimdark than some others so those new to the genre should enjoy but it also has the brutalness that typifies the genre. Mar 18, Milo BOK rated it really liked it Shelves: notablereleases , epic-fantasy , releases-read , fantasy. So I went in with anticipation, and the end result? Well, the end result was good.

I actually really enjoyed this book. Rather than follow a variety of characters across the entire world, Richard Ford chooses to hone in on one city, or to be more accurate — a cityport. Steelhaven, and populates it with a vast amount of inhabitants, fleshing each of them out and developing them into more than just your average one dimensional, stock fantasy heroes. And therefore, even though the larger responsibilities of government are left to councillors of her father, Janessa still has to deal with the smaller scale bureaucratic duties.

Many of the other seven characters however, could easily fit stereotypical roles, which by saying this would almost make me hypocritical by going back on my earlier statement about them being one dimensional and your standard heroes. Ford has taken a similar approach to what Whedon took with Firefly, and deliberately work within these predefined roles.

Creating attention to characters as well as the action and handling both in a way that still leaves plenty of time for worldbuilding, Ford has managed to create the perfect balance. Whilst there may not be one ongoing, main plot thread that tangles all the little extras together, the book is very good at exploring different, subplots across the city.

Oct 20, Shaitarn rated it it was ok. From the back cover: The vast cityport of Steelhaven was once a symbol of strength, maintaining an uneasy peace throughout the Free States. But with the King away, leading his armies, the city is rotting from the inside and the streets are slick with blood. And now a dark cloud hangs over the capital in the form of the dread warlord Amon Tugha.

When his herald infiltrates the city, exploiting a 2 stars - I was going to go for 2. When his herald infiltrates the city, exploiting a dark criminal underworld, and a dark magic begins to rise, the fate of the Free States will fall into the hands of the most unlikely saviours. What I liked about this book: It was fast moving. It was dark and gritty - probably this is classed as grimdark, but to me it didn't feel as dark as some of the stuff by writers like Abercrombie.

What I didn't like about this book: The world building wasn't what I was hoping for. The whole novel is set in this one city, so would it be too much to ask for a more detailed description of it? Sure, we had one character coming from one of the temples and that stock fantasy character, the rebellious princess, living in the palace, but how did it all fit with the poorer areas all the other characters seemed to come from? There was no city overview and no map, so I'm none the wiser. It felt as if the whole city was a tangle of alleyways and narrow streets inhabited by starving poor people with a palace and temple stuck in there somewhere and a port glued to one end.

It just didn't feel real to me. The magic system: there wasn't one. One of the characters is studying to be a mage, but although he read books and went to lectures there was no explanation of what he was trying to learn or how magic works. We're told about dark rituals involving blood and runes and there were mutterings of 'a price to be paid' but that was about it. OK, fine. I'll file this one under 'magic works, because the author says it does. 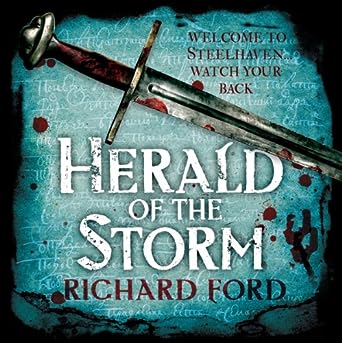 That might not be a problem in a larger book, but this one clocked in at just under pages. It felt as if we got the beginning of everyone's story and then the book ended. It didn't end, it just stopped. This is one of my pet peeves: if I have to read a whole trilogy or quartet or whatever to get the full story then let me know on the front cover with a 'the first in a XX part series!

I feel this is going to be one of those books that everyone else loves and I don't. I don't hate it, I just feel a bit short-changed: to be honest I was expecting more of a complete story, not something that felt like a collection of prologues I disliked the almost universally admired 'Malice' for the same reason - it felt like a prologue. You may like it, but I'm going to take it off my book shelves for now and contemplate whether or not to pass it on to the charity shop.

Nov 26, Eric rated it really liked it Shelves: fantasy. Oh well. Herald of the Storm is an interesting start to the Steelhaven trilogy, full of some great worldbuilding, distinct characters, and excellent writing. The plot is fairly straightforward. Steelhaven is the center of power of the Free States, and an enemy horde is on its way. While the king is off fighting the enemy, his herald infiltrates the city to prepare for the inevitable invasion. Ford takes a 3. Ford takes a pretty simple plot and unpacks it by showing the story from the perspective of a number of different residents of Steelhaven, each offering a different glimpse of the city.

The start of the book may be off putting to some people, as the first 6 or 7 chapters are all from a different POV character.

Lord Of Ashes By Richard Ford

As the book progresses, we start seeing the plot threads coalesce as some of the earlier setup pays off. The characters themselves are diverse and interesting. We have a princess, a street urchin, an apprentice magician, a warrior maiden, a criminal rogue, an ex soldier, and an assassin. One of the things I have to praise is the writing. The descriptions are evocative, and each character has a distinct voice, which is crucial with so many different perspectives.

Another thing I liked is that the author kept the chapters short, which helped with the pacing. Almost all of the story takes place within the city of Steelhaven, which to me is the true protagonist of the book.

The author does a great job creating a city that feels real, and the story has a nice atmospheric feel to it. Despite the story being limited in scope in geographic terms, there was some great worldbuilding added in a way that felt organic. I love me some good fantasy lore, and the sporadic mentions of intriguing lands and ancient battles left me wanting to know more about them. Aeslanti beast men? Wyvern Guard? I definitely want to see more of this world. The biggest negative for me is that the book largely feels like a setup for future events. While the short chapters helped tremendously with the pacing, it took me a little while to settle into the story.

Once I did, I enjoyed the book, but some people may not have the patience to make it to the latter parts of the book. Overall, I definitely enjoyed the book and am looking forward to seeing where the story goes next. Mar 18, Doug rated it really liked it Shelves: read-in Herald of the Storm takes the fundamental parts of gritty, epic fantasy and puts the focus on character first. The lack of any cohesive plot throughout the novel may be an issue for some, but this is the story of one city in a vast fantasy world.

If you love the works of Joe Abercrombie or even George R. For a novel that ends up being less than pages, Herald of the Storm has a lot of characters.